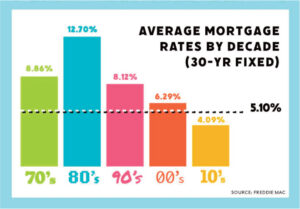 Mortgage rates change constantly. Sometimes the changes can be dramatic, while other times, the week-to-week developments might only lead to a minor adjustment. Either way, you don’t have to worry too much. Today’s rates are lower than the annual average of 30-year fixed-rate mortgages for much of the 1970s, 1980s, and 1990s.

The Federal Home Loan Mortgage Corporation, more commonly known as Freddie Mac, began tracking average annual rates for mortgages starting in 1971. In the first few years of recording, rates started out between 7% and 8%, but by 1974, they climbed up to 9.19%. We finished out the decade by finally entering double digits with 1979’s annual average of 11.2%.

As we headed into the 80s, it’s important to note that the country was in the middle of a recession, largely caused by the oil crises of 1973 and 1979. The second oil shock caused skyrocketing inflation. The cost of goods and services rose, so fittingly, mortgage rates did too. To jumpstart a flailing economy, the Federal Reserve increased short-term interest rates. Thanks to their efforts, more people were saving money, but that meant it was also more expensive to buy a home than at any point in recent time.

Compared to the rates of the previous decade, the 90s were all that and a bag of chips! Inflation finally started to calm down, and apart from 1990, not a single year-end percentage finished in double digits. And although the average rate for 1999 settled at 7.44%, rates were as low as 6.94% the year prior—the lowest annual rate ever recorded at that point in history. Not too shabby!

Many experts chalk the decrease from the previous decades up to the birth of the internet age. Along with a more informed borrower population and society in general, the country’s investment in modern technologies led to the creation of more jobs and stimulated a recovering economy.

By the time the new millennium rolled around, there was an initial jump to 8.05%, but the rest of the 2000s never saw a yearly average of more than 7%. But all was not as it seemed, as “subprime” rates helped bring on the 2008 Housing Crisis. To repair the wounded market, the Federal Reserve reduced interest rates to stimulate the economy and make borrowing affordable again for many Americans.

Things didn’t slow down in the 2010s, apart from two minor increases in 2013 and 2014. Many attribute the jump from 3.66% in 2012 to 3.98% in 2013 to the Fed’s handling of the bond market. In response to 2008’s crisis, the Fed announced it would cut down its massive bond-buying stimulus because it believed the country’s economy was healthy once again, now five years removed from the crash. This large-scale initiative led to a slight increase in the average rate halfway through the decade, from 4.17% in 2014 down to 4% in 2019.

During this two-year period, Freddie Mac recorded the lowest mortgage rates in history. In response to the global pandemic, the Fed reduced the federal fund rate to 0% – 0.25% to incentivize borrowing. So, short-term, and long-term rates decreased, and the annual averages for the two years hovered at around 3%.

What Causes Rates to Change?

So, if mortgage rates change all the time, what’s the reason behind the seemingly endless fluctuation? While there are many factors that can affect rates, here are some primary examples:

Nobody can control most of the items mentioned above, but you can lower your debt-to-income ratio (DTI) and raise your credit score to secure a better rate.

This article was provided by the Atlantic Bay Mortgage Group.